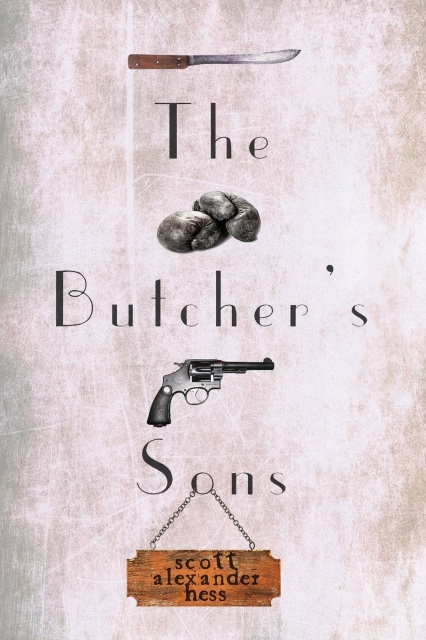 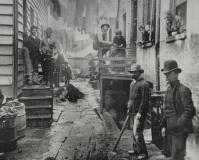 This darkly lyrical and violent family saga set in a butcher shop in New York circa 1930 tells the story about three Irish brothers, each struggling to find their role--to define their lives and express their dreams--amid the poverty of a broken home, alcoholic father, and the violent society of Hell's Kitchen. Dickie is guided by an almost animal desire to get what he wants and, as a fighter, is fearless in his pursuit of being respected by mobsters. Walt, the middle brother, romances a woman whose educated father sees the lad as gutter trash. Then there is frail Adlai, who finds himself on the most perilous path, an illicit affair with his oldest brother's best friend. The Butcher's Sons is an engaging read about desperate young men determined to do whatever they can to find something gilded amid the grime of old New York. A Kirkus Best Indie Book of 2015!

Hess has written for Genre Magazine and blogs for the Huffington Post. Hess lives in Manhattan with his boyfriend, shops at Barneys, and does not eat sugar.

Paperback, 256 pages
Add to Cart
"At once gritty, poetic, and romantic, Hess’ masterful, elegant style weaves these diverse elements into a seamless narrative that touches the heart of what it means to be human." - Kirkus Reviews

''The Butcher's Sons manages to tell a thousand human stories through three young brothers in Hell's Kitchen. Their struggles for success and respect, their yearning desires for sex and love, are compelling and familiar and disturbingly influential--they make a reader want to throw a punch and then go get laid.'' -L.A. Fields, author of Countrycide and My Dear Watson

"The complexity of love—brotherly, fatherly, romantic—told through the eyes of brothers Dickie, Walt, Adlai, and their father Pat in The Butcher’s Sons is at once universal and compellingly particular. It's a wallop of a read, packed with beauty and brutality—often in the same sentence—and poetically wrought by Scott Alexander Hess.” -Jamie Brickhouse, author of Dangerous When Wet: A Memoir

"A brilliant storyteller, Hess cuts a brutal, vital keyhole into the lives and loves of a lost era with the emotional craft of a master builder, and the gentle caress of a poet. A deeply beautiful book, I fell in love with The Butcher’s Sons.” - David Drake, Obie Award-winning writer of The Night Larry Kramer Kissed Me

"I’m at loss for words. To describe this book. To do it justice. The first thought that pops up into mind is beautifully written followed by what the hell did I just read. My thoughts, feelings are all over the place. This is not just a romance. Or a historical. It’s a story of family." - Gay Book Reviews

"In his brutal and moving third novel, Scott Hess exhibits exciting new range by tackling the tense, dramatic story of three wholly different brothers living and working together in Hell's Kitchen in the 1930s.  The risks for these Butcher's Sons are many, and the stakes sky high, as each finds his own definition of what it is to be a man." - Helen Schulman, author of This Beautiful Life