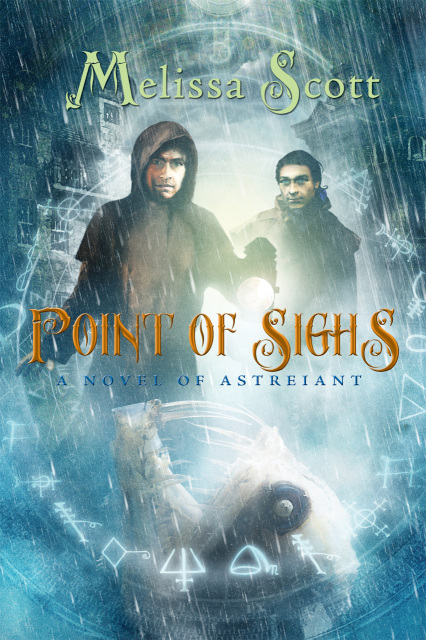 Autumn downpours soak the city of Astreiant and cast a gloomy pall over its streets, while storms at sea have delayed merchant ships bearing important cargoes from distant lands. For Philip Eslingen, whose stars are bad for water, the season adds damp misery to the complications of organizing the new and controversial City Guard.

The murder of a tea captain brings to a head the rivalry between Point of Sighs, where the crime took place, and Point of Dreams, where Eslingen’s lover, Adjunt Point Nicolas Rathe, doubts the evidence against the son of a prominent Dreams merchant house. As extortion against traders by the dockers of Point of Sighs and corruption among the district pointsmen come to light, the mystery deepens, but nothing can prepare Rathe and Eslingen for the return of a legend and the revival of a savage cult.

Centuries ago the hungry spirit that haunted the River Sier was propitiated by the ritual sacrifice of handsome young man, but the Riverdeme has long been bound by the city’s bridges. Now the river seethes with vicious dogfish, mauled corpses are pulled from the water, and Eslingen—peculiarly at risk from any watery threat—and Rathe must uncover the person who seeks to unleash an ancient evil.

Fifth in the beloved Astreiant series, Point of Sighs brings new supernatural danger and political intrigue to the capital of Chenedolle—and unexpected challenges to the relationship between pointsman Rathe and soldier Eslingen.

"A rich, complex novel, Scott deftly weaves these disparate narrative strands and more together into a satisfying continuation of the stories of Nico and Philip." - Out in Print

All the City of Astreiant Books