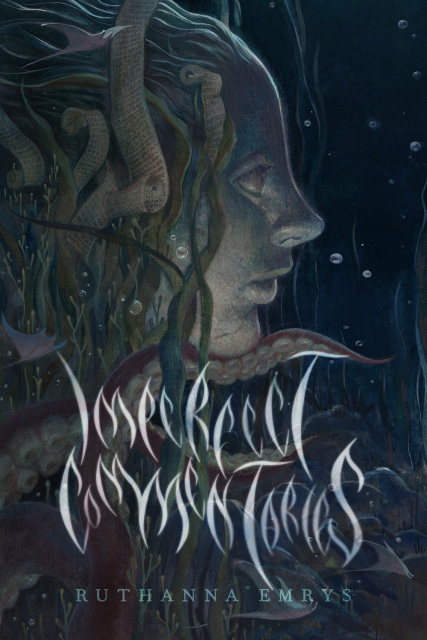 Sympathy with the sea, with the weird, and with monsters fills the stories of Imperfect Commentaries. Ruthanna Emrys's collection offers readers feminist and #ownvoices Neo-Lovecraftian fiction, anthropological science fiction, and fantasies of belonging, plus miscellaneous deleted scenes, poems, and secret story origins. Readers familiar with her novels (Winter Tide and Deep Roots) will see the first appearance Aphra Marsh, an Innsmouth survivor, still recovering from her losses and making a life for herself in late-1940s San Francisco in "The Litany of Earth."

Ruthanna Emrys lives in a mysterious manor house on the outskirts of Washington, DC with her wife and their large, strange family. Her stories have appeared in a number of venues, including Strange Horizons, Analog, and Tor.com. She is the author of the Innsmouth Legacy series, which began with Winter Tide. She makes home-made vanilla, obsesses about game design, gives unsolicited advice, and occasionally attempts to save the world.

"Seven Commentaries on an Imperfect Land"

Interlude: At the Haiku Earring Party

Interlude: The Serpent Explains the Nature of Tricksters to Her Wife

The Litany of Earth

The Taste of Prayer, the Smell of Snow

Interlude: I’ll Title This Sestina After I Put the Baby to Bed

"The Word of Flesh and Soul"

Add to Cart
"Emrys is as adept at blending genres as she is at blurring the lines between the human and the monstrous. Come for the righteous revisionist Lovecraftiana, stay for the speculative marvels that read like Karen Russell channeling the baroque ghost of Clark Ashton Smith. Haunting and heartfelt, this is a collection to savor (preferably with a plate of honeyed saltcakes—recipe included)." - Jesse Bullington, author of The Folly of the World ​