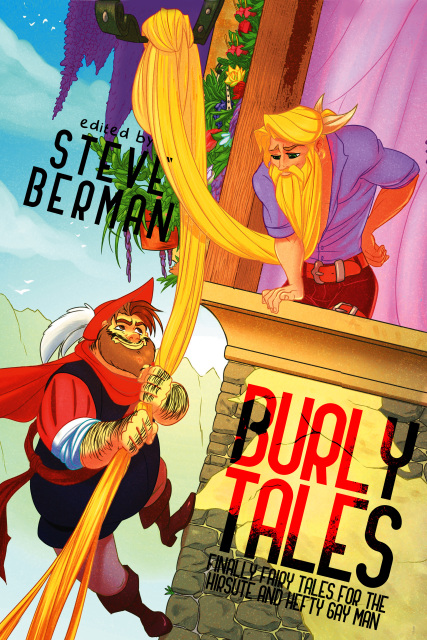 What has been missing from the daring tales of fairy tale heroes is quite simply some heft. In Burly Tales, Lambda Literary Award-winning editor Steve Berman has gathered a dozen stories of whimsy and romance that feature gay men with plenty of curves and fur. Run away with us to enchanted woods, where the cubs and bears are not going to eat you (not without informed, enthusiastic consent), where no one will judge if you take up residence in a house with seven bearded men and only one bed, and where if you fall in love with a large, hairy man with a forbidding castle and a well-stocked library, he'll still be that way after you kiss him. Featuring an introduction by Matthew Bright and an afterword by award-winning ursine author Jeff Mann.

"The Red Bear of Norroway" by John Linwood Grant

"A Giant Problem" by Charles Payseur

"The Most Luxuriant Beard of All" by B.J. Fry

"The Man Who Drew Cats" by Alysha MacDonald

"Bears Move In" by Ann Zeddies

"This anthology of romances, adapted from fairy tales and fables, runs the gamut: from short stories to poetry, from contemporary settings to fantasy, from humorous to serious; all of them celebrate the beauty of large, hairy men.... Highly recommended for all public libraries." - Library Journal, starred review