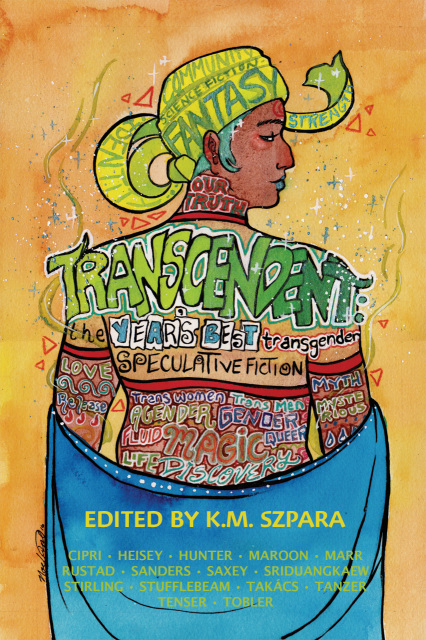 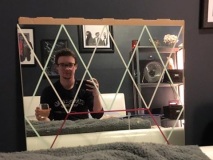 There are fantastical stories with actual transgender characters, some for whom that is central and others for whom that isn't. And there are stories without transgender characters, but with metaphors and symbolism in their place, genuine expressions of self through such speculative fiction tropes as shapeshifting and programming. Transgender individuals see themselves in transformative characters, those outsiders, before seeing themselves as human protagonists. Those feelings are still valid. Cisgender people can never quite understand this distancing. But though the stories involve transformation and outsiders, sometimes the change is one of self-realization. This anthology will be a welcome read for those who are ready to transcend gender through the lens of science fiction, fantasy, and other works of imaginative fiction.

Table of Contents:
"The Shape of My Name" by Nino Cipri
"into the waters I rode down" by Jack Hollis Marr
"Everything Beneath You" by Bonnie Jo Stufflebeam
"Contents of Care Package to Etsath-tachri, Formerly Ryan Andrew Curran    (Human English Translated to Sedrayin) by Holly Heisey
"The Petals Abide" by Benjanun Sriduangkaew
"Treasure Acre" by Everett Maroon
"Splitskin" by E. Catherine Tobler
"The Need for Overwhelming Sensation" by Bogi Takács
"The Scaper's Muse" by B.R. Sanders
"The Librarian's Dilemma" by E. Saxey
"Chosen" by Margarita Tenser
"Where Monsters Dance" by A. Merc Rustad
"Be Not Unequally Yolked" by Alexis A. Hunter
"The Thing on the Cheerleading Squad" by Molly Tanzer
"Kin, Painted" by Penny Stirling

In the best of all timelines, K.M. Szpara lives in Baltimore, Maryland, with his black cat and miniature poodle. He has a Master of Theological Studies from Harvard Divinity School, which he totally uses at his day job as a paralegal. On nights and weekends, Kelly advances his queer agenda by writing science fiction and fantasy novels. His short fiction appears in Lightspeed, Shimmer, and Glittership. You can find him on Twitter at @KMSzpara.

​Paperback
Add to Cart
"...Szpara stitches together a collection that feels like a cozy blanket for trans readers who long for inclusive fiction (and for cis readers who may well wonder why there’s so much gender-essentialism in everyday SF/F)...This is a timely (which is to say long overdue), wide-ranging, and highly enjoyable collection." - Publishers Weekly, starred review

"Traditional boundaries of identity and structure are blessedly absent as this anthology challenges readers’ expectations in ways that few have managed to do before. A varied, remarkable collection of trans-themed fiction." - Kirkus Reviews

"The balance of stories that are about being transgender with stories that feature transgender characters and themes is solid–it gives the reader a variety of viewpoints and approaches, always a good thing for a year’s best." - Brit Mandelo for Queering SFF at Tor.com

"...a commendable addition to libraries with large science fiction collections." - Loren Klein for the GLBT Round Table of the American Library Association

If you're seeking spec fic that goes beyond gender binaries, consider this anthology: 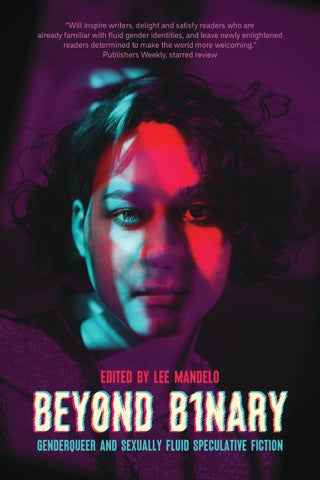 Speculative fiction is the literature of questions, of challenges and imagination, and what better to question than the ways in which gender and sexuality have been rigidly defined, partitioned off, put in little boxes? These seventeen stories explore the ways in which identity can go beyond binary—from space colonies to small college towns, from angels to androids, and from a magical past to other worlds entirely, the authors in this collection have brought to life wonderful tales starring people who proudly define (and redefine) their own genders, sexualities, identities, and so much else in between.

"Sea of Cortez" by Sandra McDonald

"Eye of the Storm" by Kelley Eskridge

"A Wild and a Wicked Youth" by Ellen Kushner

"Prosperine When It Sizzles" by Tansy Rayner Roberts

"The Faerie Cony-catcher" by Delia Sherman

"Another Coming" by Sonya Taaffe

"The Ghost Party" by Richard Larson

"Sex with Ghosts" by Sarah Kanning

Lee Mandelo is a writer, critic, and editor whose primary fields of interest are speculative fiction and queer literature, especially when the two coincide. They have two books out, Beyond Binary: Genderqueer and Sexually Fluid Speculative Fiction and We Wuz Pushed: On Joanna Russ and Radical Truth-telling, and in the past have edited for publications like Strange Horizons Magazine. Other work has been featured in magazines such as Stone Telling, Clarkesworld, Apex, and Ideomancer. They also write regularly for Tor.com and have several long-running column series there, including Queering SFF, a mix of criticism, editorials, and reviews on QUILTBAG speculative fiction.