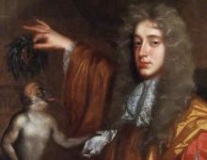 Once a poem gets under the skin, it survives and takes on a life of its own. Author Gunn, who has spent years cataloging and exploring gay mysteries, gay pulps, and gay drama through the ages, turns to poetry for his last work.

From the Introduction: "Facing my own mortality, I gradually became more forthcoming about my personal relations with the poems. And when I reached the second half of the twentieth century, I increasingly allowed my own taste to determine which poets I wanted to explore.... Each new book I publish becomes my favorite, but I think I have genuinely enjoyed writing this one the most, perhaps because I have been more willing to open up in ways I never had before."

And so Gunn covers poetry that we can refer to as gay, in the modern sense, even if the modern sense of being gay had yet to happen. From the story of Gilgamesh and the biblical passages of David and Jonathan to Persian homoerotic poems to bawdy verse by the Earl of Rochester. Gunn addresses names familiar to many of us: Wilde and Whitman, Genet and Ginsburg, but also poets that deserve more attention, such as Roger Casement, Jaime Gil de Biedman, and Hal Duncan. This book will provide an engaging introduction to great works of poetry that will inspire gay men.